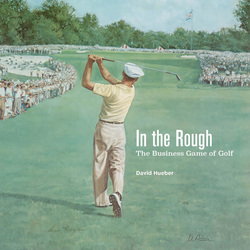 For more than three decades, David Hueber was at the forefront of golf's greatest period of growth.  He had a front-seat view and a hands-on role in four significant golf organizations from the 80's through the turn of the century.

While at the PGA Tour, he was the point man in building the Tour's new business relationship with the PGA of America. As the CEO of the National Golf Foundation (NGF), he turned that organization into a credible and capable research company and industry advocate. And, as CEO of the Ben Hogan Company, he doubled that company’s sales and sponsored the Ben Hogan Tour, now known as the Web.com Tour. He also served as CEO of Ben Hogan Properties, which owned and operated Pebble Beach, as well as being CEO of Cosmo World Group, the Japanese conglomerate that owned and operated golf companies and high-end golf courses and resorts.

In this book are many stories and an insider's vivid view of David's time as an executive from key vantage points in the golf world; so, what you’ll find here is very interesting stuff because he had the extraordinary opportunity to know and work with some of the most influential and memorable people during the golf’s greatest period of growth.

While at the PGA Tour, David worked on the business side to grow the game and professional golf, and played a valuable role in laying the foundation for the commercial success that the modern day PGA Tour enjoys today. Following his stint with the Tour, David moved on to resurrect the NGF from near bankruptcy and give it new life as a vibrant and effective research and promotional organization to stimulate the supply and demand for the game. Back then, golf was in the doldrums, and was considered by many to be a dying sport. As the NGF CEO, he founded the biennial Golf Summits, which was the first time the golf industry ever assembled to assess the "State of the Game."

The first Golf Summit was held in 1986 at Westchester Country Club and turned out to be a pivotal point for the U.S. golf industry. David then hired the highly regarded consulting firm, McKinsey and Company, to help analyze the NGF research and to develop a Strategic Plan for the Growth of the Game that would be presented at the 1988 Golf Summit. The NGF research revealed that the game was stagnating as defined by the number of golfers and rounds played. However, the NGF saw an opportunity to grow the game and golf industry, because the Baby Boomer population segment had a large number of golfers, and it was expected that as they aged, they would have the time, money and desire to play and spend more on the game of golf.

To meet this much anticipated growth in the game, the NGF strategic plan put forth the notion that the golf industry needed "to build a golf course a day between 1990 and the year 2000 to keep up with the anticipated demand." That "Course a Day" promotional campaign was featured in PGA Tour television PSA's and caught on with the media and the golf industry. David was responsible for it, and this idea changed the course of the game and the golf business in the 1990's.

Many sectors in the golf business benefited from that shot in the arm. Golf businesses found investors on Wall Street to fuel their growth, and both PGA Tour galleries and television ratings climbed significantly.

We did build a golf course a day during that period. The number of golfers, as predicted, increased to 30 million and rounds played increased to over 500 million. It was a monumental achievement for the NGF to ignite the transformation of the national perception of golf as a dying game / business, and to refashion it into something cool to play and a growth industry for a broadening list of involved corporations.

After working for the Japanese for nearly 18 years and always seeking new challenges, David decided to go back to school to teach and earn a doctorate at Clemson University. Before doing so, David and his wife, Cindy, had dinner with my wife Judy and me, and he asked me what course of study I thought he should pursue. I encouraged him to focus on the environmental issues confronting the future of the game. The subject of his dissertation research became “sustainable golf course development and management.” That last notation tells you even more about the kind of person David is. He went back to school and earned his Ph.D at an age when
most people are planning their retirement.

These findings are important because that paradigm change in the nature and type of golf courses built has contributed to the recent decline in the number of golfers and golf rounds played. In the final analysis, golf courses are both an environmental and economic asset. In order for golf to change its course, grow the game and the golf business, it needs to once again change its image by redefining itself as a sustainable industry, proactive in preserving nature for future generations.

David has been and will continue to be an important player in the golf world. He has moved the game forward in his own unheralded way, and the game and business of golf is better for it.  David's story, like his journey through the game, is a fascinating one.  Enjoy the read.