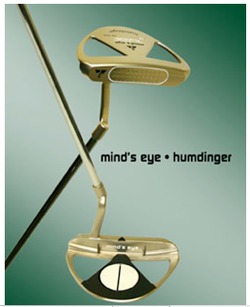 Your Poor Putting is not Your Fault!

Your poor putting is not your fault! You can’t help it because you automatically misalign the putter face every time due to the fact that you have a dominant right or left-eye. Can you imagine trying to hit a target if your sightline caused you to miss the target to the right or left?

The patented Mind’s Eye optical alignment system simply uses a line angled one degree atop a white disk that when used to aim the putter will compensate for the open or closed face that causes golfers to aim left or right of the target line. When the left or right-eye dominant putter uses the angled line to realign the putter face, the clubface is automatically squared to the target line. No other adjustments in the putting stroke need to be made to get the ball rolling on line.

Jack Nicklaus is the best example of a left-eye dominant golfer, and you have probably noticed how he crouches behind the ball to compensate for his inside to out “push” putting stroke with a slightly closed putter face.  Greg Norman, on the other hand, is right-eye dominant, and upon close examination of his putting stroke, you might have noticed that he closes his putter face on the back stroke in order to square his open putter face. Both are great putters, and both had to make some adjustment in their address and/or putting stroke due to their left or right-eye dominance.

All golfers make some adjustment in their address and/or putting stroke to compensate for their left or right- eye dominance. For example, most golfers are right-handed and have a dominant right-eye.  You have probably noticed that amateur golfers often hit their putts with an outside to in “cut” putting stroke in order get the ball rolling on the proper line.  Ironically, these golfers do not even realize that their putter face is open to the target line, so their adjustment for this misalignment must be made with their putting stroke.

Mind’s Eye putters automatically make this adjustment for you, so it won’t be necessary to make any compensating moves with your stroke.  If you use the angled line on the Mind’s Eye putter to aim your putt, you will be aligned properly, so your chances of making a putt are much improved.

Everyone Misaligns the Putter face

Most golfers do not realize that there is an optical illusion when they align the putter face.  What looks “square” to them is really an open or closed clubface depending upon whether they are a right or left-eye dominant putter.  To prove this phenomenon, we tested a number of golfers and determined their eye dominance, and then we had them aim their own putter toward a target.  Once they were set in their putter alignment, we placed a laser onto the center of their putterface, and turned on the laser.  In 100% of the cases, the golfers were misaligned to their intended target.  We repeated this test three times with each golfer, and the results were the same. Next, we gave each golfer a Mind’s Eye putter that was a similar design to their own putter.  We then asked them to use the line on the white disc to aim the putter face and placed the laser onto the center of the putter face. When we turned on the laser, 100% of the golfers were perfectly aligned to the intended target.  We repeated the test three times with each golfer, and the results were the same.

It is not hard to figure out that if your aim is wrong in the first place then you will have to make some adjustment in your putting stroke to compensate for that misalignment.  Often, golfers are not even aware that they are doing this.  That small manipulation with your putting stroke to adjust your putter face angle can have some disastrous results.  It might also explain why you are such and inconsistent putter.  Some days you make the right moves, some days you don’t. Sometimes you see the line and the hole looks huge, but more often than not, it is hard to figure out why finding the line is so illusive and why the hole looks so small. The best way to putt consistently well, day-in and day-out, is to aim your putter properly in the first place, so that you do not need to make any unconscious manipulations and compensations in your putting stroke.

Now, all you need to know is whether or not you have a dominant left or right-eye, so you can stop aiming left or right of the target line.  There is a simple test to find out which eye is dominant, if you don’t already know.

Dr. Lawrence Lampert, in his book, The Pro’s Edge…Vision Training for Golf, explains the importance of knowing which eye is dominant and describes several ways determine your dominant eye.  Perhaps the simplest method is to “hold your arms and hands extended forward with your palms away from you (fig. 1) and bring them together to form a hole with your thumbs as shown in Figure 2.”

Now, look at a small object (perhaps a light switch or door knob), through that small hole that is about 10 feet away with both eyes open.  Dr. Lambert continues, “Now close one eye and then the other.  The eye that sees the switch (or other suitable target) is your dominant eye.”

How to line-up a Mind’s Eye Putter


If you are right-handed and have a dominant right-eye, then you will naturally aim your putter face to the right of the target.  If you have a dominant left-eye, you will naturally aim your putter face to the left of the target.  Conversely, the opposite is true for left-handed golfers. You can improve your putting immediately, once you realize that you naturally misalign your putter with either an open or closed clubface.  Due to your eye predominance, your clubface may look square to the intended target line, but it is not.  As a result, you make some subconscious adjustment in your putting stroke in order to get your ball rolling on line.

When you address ball with a Mind’s Eye putter, you can easily square your open or closed clubface by using the alignment line on the white disk.  That line is angled one degree, so when you adjust that alignment line to your aim-line, your putter face will be automatically square to the target. 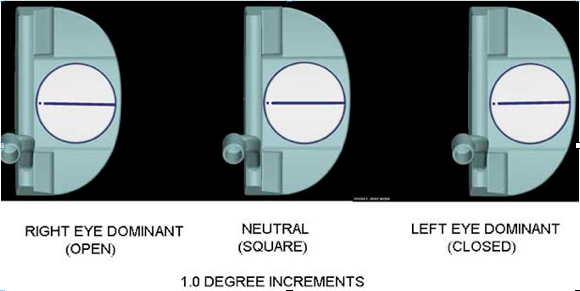 1.   First, see the line in your mind's eye and then align the putt using the golf ball and the white disk to find the line and the center of the clubface. Next, find an aim point that is no more than a foot or two in front of your intended aim-line. The objective is to get the ball started on the proper path to the hole.

2.   Second, use the angled line atop the white disk to make the final and precise adjustment to square the clubface to the target line.  The line is angled in such a way as to correct for the clubface misalignment that naturally occurs due to eye-dominance.

Which Mind’s Eye putter is right for you?


Lastly, know that the Mind’s Eye putters are the finest quality putters that you can buy.  They are precision milled with computerized CNC machinery.  We are the only company that actually double CNC mills its clubfaces.

The Mind's Eye Humdinger is eye-catching, and is the lead putter model because it is so distinctive looking and easy to lineup. You can point the black arrow down the aim-line. You can use the white disk and the golf ball to center the ball on your putter face to ensure better alignment. And, you can use the angled line atop the disk to sight-in the precise alignment and square your putter face given your eye-dominance. 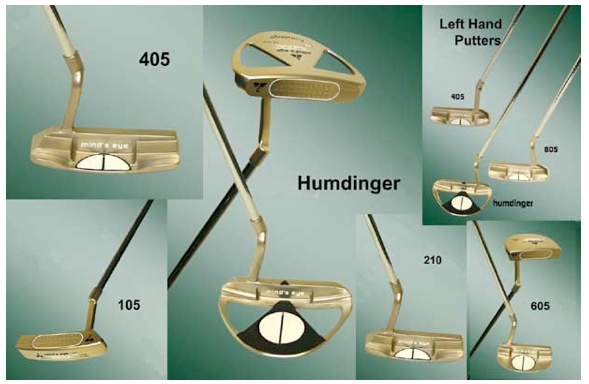 However, we know that there is no putter design that suites everyone. So, we have incorporated these same optical alignment features into the most popular putter designs. In addition to the Humdinger, we have five different models: the 405; 805; 605; 210; 105; and we have three left-handed models (for the Humdinger, the 405 and 805). Whether you like a Ping Anser style, a mallet or a heel shafted model, there is a Mind's Eye putter that is perfect for you. All are finely crafted putters with double CNC milled faces. No one else makes putter so precisely.